The growing role of simulator technology in training for CBRNe threats 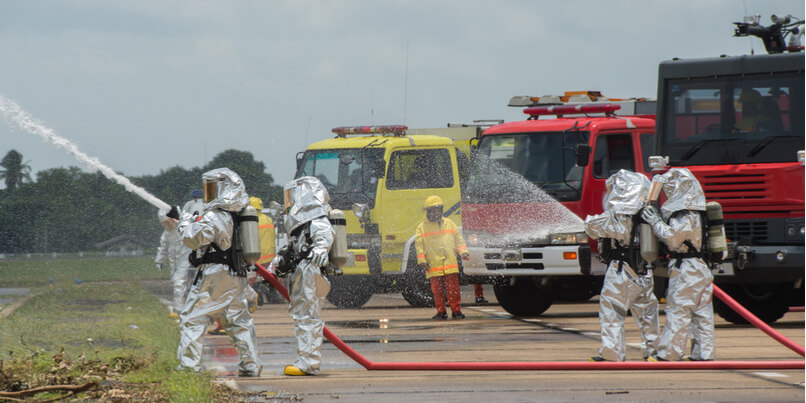 In the UK, it is not unusual for first responders to be in possession of very little (or, in some cases, nothing) in the way of detection, identification or monitoring (DIM) equipment in the course of carrying out their daily duties.

In the event of a major incident however (such as a terrorist attack, major fire, flood or a collapsed building) they may be called upon to support the activities of a specialist Hazardous Area Response Team (HART).

In this blog post we summarise the features and functionality of four specific items of equipment in common use by CBRNe response teams - and we explore the role that their simulator equivalents can play in the context of training exercises.

The ADM 300A series of portable multi-functional survey instruments facilitate the detection, measurement and digital display of dose rate levels of Gamma radiation.The instrument also has a Beta detection capability.

A simulator equivalent (such as the Argon ADM300A V1B-SIM radiation training simulator) can serve as an ideal training instrument for radiological survey missions. Crucially, this instrument enables CBRNe response teams to safely and realistically train without the need for a potentially hazardous ionizing radiological source.

For the CBRNe instructor, there is also the advantage of retaining full control of the exercise, with the ability to conduct multi-detector or multi-threat training within the same operational scenario.

When attending CBRNe incidents, emergency services personnel also need to be able to monitor their own exposure to any forms of potentially harmful radiation - and to react quickly in the event that acceptable dose rate levels are exceeded.

In such circumstances they rely on the services of an electronic personal dosimeter (EPD), such as the EPD Mk2, which has been designed to respond to gamma, beta and X-radiation.

For the purposes of training however, the use of a simulator equivalent such as the EPD Mk 2 SIM retains all the user interface of the real dosimeter but which responds to safe, environmentally friendly, simulation radionuclide sources.

The detection of chemical warfare agents (CWAs) or toxic industrial chemicals (TICs) relies on the use of a person worn device such as the Smiths Detection LCD3.3.

A key benefit of this form of detector is its ability to identify specific CWAs, however personnel safety, and environmental considerations, can render many forms of simulant-based training impractical for CBRNe exercises.

When the highest levels of realism are required, a simulator detector such as the LCD3.3-SIM can prove an invaluable training resource. The LCD3.3-SIM has been designed to respond to electronic sources to safely replicate all the features and functionality of the real detector, while at the same time mitigating all risk.

Remote control features, together with powerful After Action Review (AAR) also ensure that instructors retain complete control of the exercise and that trainees understand if, or when, they've gone wrong.

A portable chemical contamination control device such as the AP4C can be used to directly detect a wide range of chemical agents (and their precursors) including compounds of phosphorus (G and V agents), sulfur, arsenic compounds and gases such as ammonia, Cyanogen chloride and Cyahydric acid. For training purposes however, being able to operate without the need for harmful simulants can be a major asset.

When authenticity is required, but with no compromise on trainee safety, a simulator detector such as the AP4C-SIM can provide an invaluable solution. This particular device can also be used in conjunction with detection instruments that work on different technology principles - to provide compatibility with other simulator products (such as CAMSIM, LCD3.2e-SIM, RAID-M100-SIM and the S4PE-SIM) for multi-detector / multi-substance training exercises.

Major terror incidents such as the Salisbury nerve agent attacks and the Manchester Arena bombing provide a stark reminder of the constantly evolving nature of CBRNe threats - and of how heavily we rely on the knowledge and expertise of our region's specialist CBRNe response teams.

Effective CBRNe training requires the highest levels of realism and authenticity, but whilst still ensuring there is zero compromise on personnel safety. In such scenarios, simulator detector technology can provide a viable and effective solution that puts instructors firmly in control of their exercises.