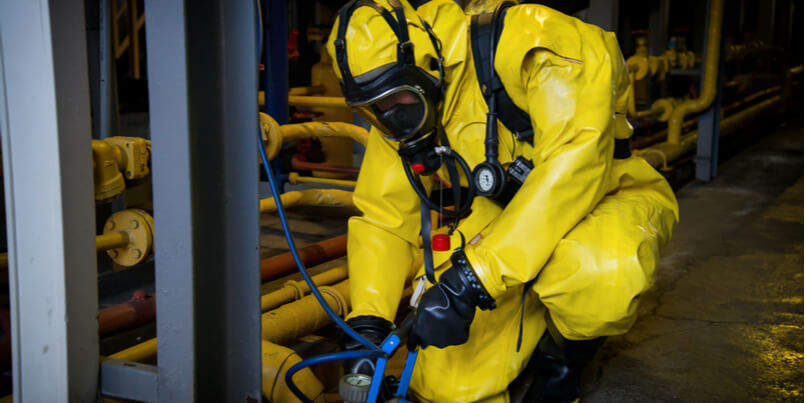 Radiological surveying is an integral task in maintaining safety wherever quantities of ionizing radiation are in use, or where they are suspected to be present.

Whether it is in the context of a military operation, emergency first response or an industrial setting, radiation safety personnel need to be equipped with the right tools to ensure they can accurately assess their environment and determine the best course of action.

Most radiological survey instruments have been designed to be easy to deploy, but it is important to be competent not just in the hands-on operation of the equipment but in being able to interpret the readings that are obtained and decide upon the appropriate recommendations to ensure safety is not compromised.

Once it has been established that the radiation hazard originates from a sealed source - meaning that there is no contamination risk - the principles of time, distance and shielding are vital.

Whenever possible, trainees should be provided with the opportunity to explore and test these principles in hands-on training scenarios that replicate real-life situations.

By adding the use of simulator detector equipment, there is also an opportunity for trainees to fully experience the characteristics, the behaviour and the risks of ionizing radiation - and to do so in a learning environment that is safe, immersive and highly realistic.

The flexible and high-fidelity nature of well-designed simulator detectors makes it possible for trainers to create a virtually unlimited range of realistic training scenarios for their students.

In this blog post we explore how the key principles of radiation safety can be put to the test in a range of hands-on scenarios.

Radiation safety hinges on the understanding of the correlation between dose (or exposure) and dose rate (or the radiation present in the atmosphere) is directly related to time.

When the time (or the duration of exposure) is reduced by half, for example, the dose received will also be halved.

Once the trainee has been able to assess the dose rate present in the atmosphere, this information can be used to calculate their incident stay time in the hot zone (calculated as Exposure Limit divided by Dose Rate), which will allow them to carry out their activities as quickly and as safely as possible.

Distance - or how close an individual is to a radiological point source - is a key factor in enabling trainees to control exposure.

When the distance between the individual and the point source is doubled, this will reduce personal exposure by 75%, according to the rules of the Inverse Square Law.

How close it will be possible to get to a source of radiation without high exposure will depend on the energy of the radiation and the activity of the source.

Distance is a prime concern with gamma rays as they travel at the speed of light. Alpha particles, meanwhile, travel just a few inches in air, while beta particles can travel several feet - meaning that once an operator backs out of the affected area (and assuming that the material is not being spread by wind, rain or other forces) the trainee is no longer at risk.

Radiation shielding is another vital skill that be put to the test during radiation training exercises.

Shielding is based on the principle of attenuation - or the extent to which a barrier can be used to block or bounce a radio wave.

Which radioactive shielding material will be best suited to the task, will depend on the penetration of the dose.

Alpha particles, for example, can be stopped by shielding that is as thin as a sheet of paper - while beta radiation requires something much heavier, such as an inch of wood or a thick piece of aluminum.

The ability to control (and operate within) a hazard perimeter will rely on a trainee's proficiency in the following skills:

Understanding the principles of time, distance and shielding, and having the opportunity to put this knowledge to the test in realistic training scenarios, will be vital in ensuring that radiation safety personnel are able to carry out their duties safely, efficiently and effectively.

RaFTS provides a superior first responder training solution and produces a response within an actual radiation detector that exactly replicates all the physics of real-world usage.