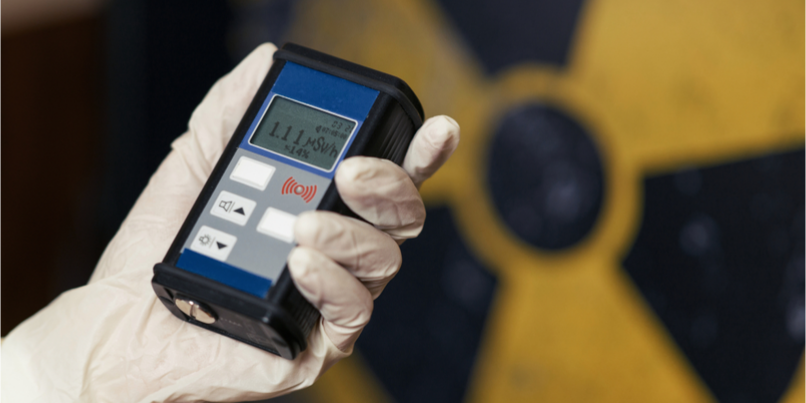 Large-scale releases of ionizing radiation are thankfully a rare occurrence. But with just over sixty commercially run nuclear power plants currently in service in the US, and fifteen operational nuclear reactors located across seven plants in the UK, the risk of an accidental release, however minor, is one that must be meticulously trained for.

The monitoring equipment used in the management of radiation incidents is relatively simple to use. But what is crucial is to be able to create realistic nuclear emergency response training scenarios that truly test the capability of every trainee.

In this blog post we revisit a day-long USAF radiological survey exercise that incorporated the use of PlumeSIM, along with a variety of Argon's radiation hazard simulators, to create a realistic and engaging training experience.

A core goal for USAF the exercise controllers was to be able to enhance the overall quality of the training scenario and in particular to improve upon the use of the standard inject training methods.

In previous exercises this might have comprised something as simple as a student being shown a piece of card to replicate a reading - or in a slightly more high-tech version of the same exercise, an electronic notepad might have been provided with a set of hypothetical instrument readings.

The use of a simulation control system using Argon's PlumeSIM software however, was to add a whole new level of realism to these traditional training approaches.

The exercise commenced with the response team being briefed on an incident of unknown severity taking place at a fictitious nuclear power station approximately twelve miles away and just upwind of the team’s present location.

The team's challenge? To decide what action would be required, to determine what equipment they would need in order to assess the potential risk, and to brief the local authority with appropriate recommendations.

The following simulation instruments were required in order to accurately assess the scene:

The simulation control system comprised a lap-top with the Argon Rad PlumeSIM software and live field base station, which provided effective real-time exercise control throughout the exercise area.

A local map was downloaded and calibrated using a feature within PlumeSIM to create a .jpg image of the local terrain. This map would prove invaluable both in assisting in planning the simulated exercise and also in tracking the students throughout the scenario.

Members of each survey team were equipped with a survey meter, personal dosimeters, and a spectrometer. The remainder of the students were provided with hand-held portable radios for the purposes of communications, logistics, data collation and generation of the hazard prediction plots.

The trainee's first decision was to deploy a Radeco air sampling station. While the assembly of the sampler proved to be relatively easy, there was more than one view as to what airflow setting should be used during the warm-up period, and also the importance of keeping the exhaust of the generator used to power the Radeco a reasonable distance from the air sample intake. There was also some debate between students as to what the ideal airflow rate should be after the initial warm-up phase.

The exercise coordinator then announced that a radioactive release had been confirmed and that the estimated time of arrival of the release to the current location was forty-minutes. At this point the simulated plume release was initiated, with the system configured to provide plume cover at the desired time over the exercise area.

A feature of PlumeSIM is the ability to fast forward or pause the exercise as needed. This enabled the exercise controller to manage the staging of the exercise to suit the specific progress and status of the participants.

Each survey team member wore a portable player device. The exercise control system was then automatically transferred to the player unit which broadcast the simulated radionuclide activity based upon the student’s geographic location.

The students’ movements throughout the exercise were monitored in real time and recorded for after-action review later back in the classroom.

A simulation source had also been installed on the inside of the filter paper holder, which meant that when the simulation Alpha probe was offered up to the filter paper a reading noticeable above background could be obtained. The reading was reported to the control cell, together with the flow rate and the duration of the sample period, which enabled the airborne activity level to be determined.

A survey of the local area was then requested. A survey team of four comprised two team members each carrying generic survey simulators, a third team member with a SAM940 spectrometer simulator, and the fourth team member with a radio communications device. Two of the team were also wearing simulation dosimeters based upon the EPD-Mk2.

The areas in which the survey team would receive simulated radiation readings, and the level of these readings, had been pre-determined by the exercise controller so that initial readings would be obtained typically 150 meters away from the command station.

The survey team spread with a distance of ten meters between each of the three instrument-carrying members, with the communications operative following a little behind the line.

As the survey team approached the “hot zone”, the readings started to climb above background level.

From an observer point of view, this was the point where the exercise started to get really interesting. It was a very sunny day and the combination of the team members' bulky PPE and the bright sunlight meant that the smaller displays were a lot harder to read.

The respirators also weren't fitted with voice modules, which meant that even simple verbal communication was a challenge, and even more so when a message was being relayed across a hand-held portable radio.

While it is fair to say that there would most likely be consistency within particular groups as to the units of measurement used, serious incidents can often require multinational involvement with the inevitable preference for varying units of measurement among different groups. What was clear was that those expected to use instruments of any type must be well practiced in being able to read and correctly interpret a variety of displays.

A number of visiting teams were also put through the same exercise scenario, some of which comprised members who had not worked together before. This in itself highlighted some interesting problems, with differing levels of proficiency within the teams, depending on if (and how often) they had trained and worked together. The value of training regularly as a team was evident. But equally too there was much to be gained from being required to work with a unfamiliar team, under challenging physical and environmental conditions.

The PlumeSIM simulation system enabled a sophisticated radiation training scenario, involving multiple radionuclides, to be implemented with ease and to be readily repeated.

From an instructors viewpoint the simulation exercise also offer some clear advantages, for example not having to calculate the dose alarms and simulated dosimeter readings for the inject cards.

There was also great value in being able to generate relatively high instrument readings which most operators had never had the opportunity to experience before.