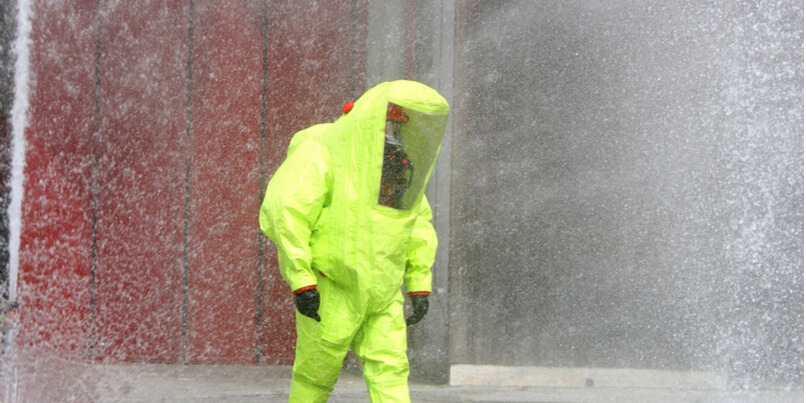 The deliberate release of chemical warfare agents (CWAs) or toxic materials in civilian settings represents a serious threat - not only to the individuals within those communities, but to the personnel charged with the initial response, specialist incident management and medical care.

The discovery of the use of the 'novichok' nerve agent in Salisbury UK in March 2018, for example, was a stark reminder of how vulnerable the wider civilian population can be to the effects of targeted and pernicious CBRNe activities.

And with the deployment of chemical warfare agents no being longer restricted to the domain of war zones or politically unstable regions, the provision of thorough first responder training together with robust detection/protection capability is even more crucial.

Over the last decade and a half, the UK has continued to develop its counter-terrorism strategy (CONTEST), with the aim of reducing, preparing for and responding to, any potential risk of terrorist activity to the UK and its citizens.

Central to the strategy of CONTEST has been the evaluation, development and optimisation of the 'Model Response' - the set of operational parameters that guides the handling of CBRNe and HazMat incidents.

Historically, the Model Response procedure has advised that initial emergency responders that are called to a suspected CBRNe contamination incident 'stand off' and await the arrival of specially trained teams that have the requisite protection and detection capabilities to manage CBRNe events.

One of the recognised shortcomings of the Model Response however has been that it is dependent on the speed with which those specialist (or strategic) operational response (SOR) assets can be dispatched to the scene.

The earliest stages of an incident can often be the most critical in terms of saving lives - as even the briefest of delays can have serious health consequences for those individuals who have been exposed to chemical contamination.

The effectiveness of casualty management is especially important when it comes to the handling of incidents involving nerve agents or hydrogen cyanide for example, where the effects of the release come on much more rapidly and with greater severity.

In 2008, a series of UK-based research trials - known as the Optimisation through Research of Chemical Incident Decontamination Systems (ORCHIDS) - were commissioned.

A core aim of the ORCHIDS project was to find ways to improve casualty care and to enhance the rapidity of initial response to a CBRNe incident, whilst at the same time avoiding unnecessary risk to the first (non-specialist) responders.

The trials resulted in a number of evidence-based recommendations on how emergency teams could look to modify their response to best manage the earliest phases of a mass CBRNe or HazMat event.

The focus of the IOR is to save as many lives as possible by facilitating early and effective intervention until such time as specialist resources are able to arrive on the scene.

In the UK, terrorist incidents that involve CBRNe agents are still thankfully rare.

But in the event of a contamination incident, the rapidity of response is critical.

A central feature of the new IOR process is that it means that response teams are able to save lives by commencing the emergency disrobing and decontamination of affected casualties as soon as they arrive on the scene, rather than having to 'stand down' and await the arrival of specialist assets.