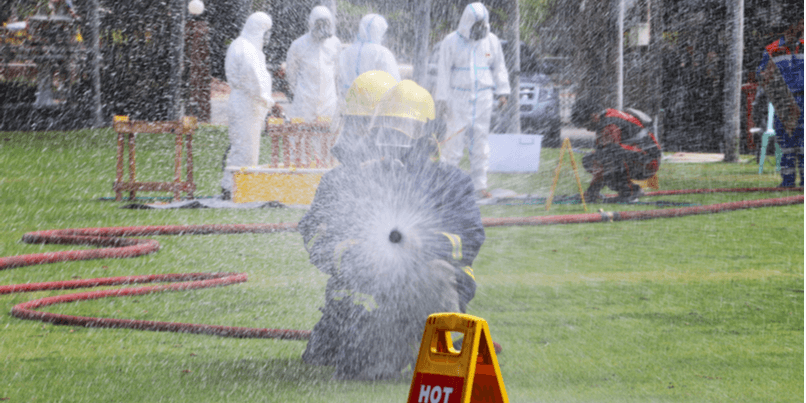 The ability for emergency responders to make informed decisions in the face of a chemical, biological, radiological or nuclear (CBRN) incident is a critical factor, both in ensuring that they are able to save lives and that they themselves do not become victims.

In the face of evermore complex and multi-dimensional CBRN threats, the use of new diagnostic and detection technologies is playing an increasingly important role in guiding decision-making and in aiding the accuracy and efficiency of emergency response.

In a study conducted by the UK’s Loughborough University Design School, researchers have been examining the operational, technological, ethical and societal aspects of CBRN response and recovery with the goal of increasing CBRN resilience.

The TOXI-Triage project, led by Professor Sue Hignett, maps the CBRN crisis journey across all levels of command, from those arriving first on the scene to those operating at the highest levels of government.

The study explores the role of communications and technology in CBRN response, it highlights the importance of recognising the nature and extent of CBRN hazards and it acknowledges the wide community of personnel who take part in the coordination and undertaking of CBRN rescue efforts.

Specific objectives of the project have included:

While the project has been more specifically focused within the field of medical triage, it does also raise some broader questions regarding the role and contribution of CBRN technologies in aiding real-time response.

In particular, it highlights the need to enhance the processes of detection, communication, diagnosis and decontamination through the increased integration of CBRN tools within field exercises.

A continuing challenge for those tasked with CBRN instruction is ensuring that first responders are adequately trained and equipped to handle the complexities of radiological emergencies.

In the bid to maintain stringent safety, the effectiveness of radiological training can inevitably fall short of the mark, with much of the essential physics of radiation at risk of being misinterpreted, reduced or missed altogether.

Until recently too, the ability to implement the use of actual detectors in a training context has been near impossible unless conducted within the confines of a specialist facility.

Now however, there are new technologies emerging that promise a substantial leap in the realism, quality and delivery of radiological training.

One such example is the Radiation Field Training Simulator (RaFTS) which combines the considerable radiological and scenario-development expertise of the Lawrence Livermore National Laboratory (LLNL) with Argon Electronics’ extensive capabilities in the development of simulator detector systems.

With the use of RaFTS technology, radiological instructors now have the ability to set up complex and highly realistic hands-on radiation exercises that require no live radiation source, that can be conducted in any location and that utilise the trainee's actual operational equipment.

The high-fidelity of the RaFTS output ensures that all of the behaviour and physics of real-world detector usage is maintained.

Trainees’ spectroscopic instruments behave exactly as they will against real radioactivity in live incidents, with the data that is produced being sufficiently realistic to enable students to identify a radioactive source, measure its intensity and determine its location.

RaFTS technology represents a substantial leap in the sophistication of the radiological scenarios that can be created.

In addition there is also the capability to extend the technology into the chemical field to further enhance the authenticity of chemical warfare agent (CWA) scenarios.

Practical, engaging and realistic training has a key role to play in ensuring that first responders are able to make the right decisions and take the appropriate actions when faced with the complex challenges of a CBRN incident.

Ground-breaking new radiation training systems such as RaFTS can play a valuable role in ensuring first responders are able to make informed decisions in the face of radiological emergencies, that they can preserve the health and safety of innocent bystanders and that they protect themselves from harm.