The role of simulation in countering chemical threats 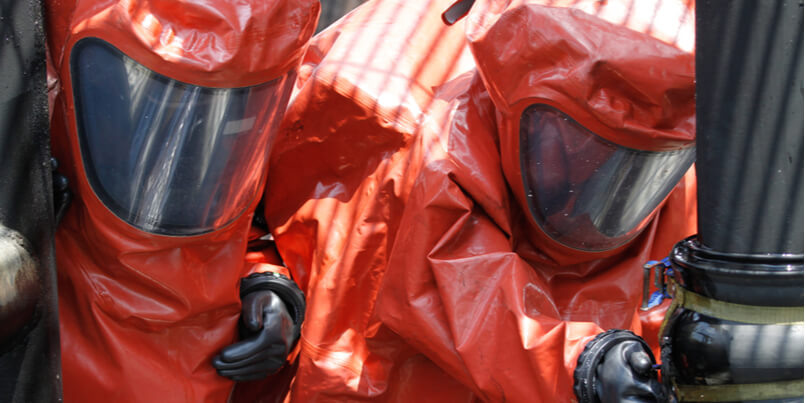 Since it first came into effect in April 1997, the Chemical Weapons Convention (CWC) has set out to eliminate the use of chemical warfare agents by prohibiting their development, production, acquisition and stockpiling.

According to latest figures published by the Organisation for the Prohibition of Chemical Weapons (OPCW), approximately 98% of the world's declared chemical weapons stockpiles are currently believed to have been destroyed.

But with mounting evidence that some countries are continuing to ignore long-established international rules, the risk of a chemical attack by a nation state or terrorist group remains a very real threat.

In a statement to the UN Security Council in December 2020, the UK’s Permanent Representative, Dame Barbara Woodward, highlighted the importance of supporting the OPCW in its investigation of chemical weapons use in the Middle East.

She also addressed the findings from a report issued by the OPCW's Declaration Assessment Team (DAT) which presented evidence of the suspected production and weaponisation of chemical warfare agents by Syria.

“The unresolved issues in Syria’s declaration include thousands of munitions and hundreds of tonnes of chemical agents, which Syria has not accounted for,” Woodward said.

“Until all the issues are resolved, the complete elimination of Syria’s chemical weapons programme, as required under resolution 2118 and the Chemical Weapons Convention, cannot be verified (and) it is undebatable that the situation represents an ongoing threat to international peace.”

With the risk of chemical attacks remaining high on the international security agenda, it is vital that military and civilian CBRN personnel are sufficiently skilled in chemical protection, detection, monitoring and decontamination operations.

Hands-on training has an especially important role to play in building students' knowledge and understanding of their detection equipment and of the readings they obtain.

As the sophistication of detection equipment and technology continues to grow, it is also vital that CBRN personnel remain up to speed with the functionality of their instruments.

Finding ways to deliver realistic training that complies with the health, safety and environmental restrictions that accompany the use of chemical simulants can often be challenging.

Historically, chemical warfare training has been limited to specialist training areas such as military bases where specific quantities of chemical simulants can be dispersed under controlled conditions.

With the increasing risk of civilian-based terrorist threats however, there is also the need to be able to conduct realistic chemical training that mirrors the conditions of civilian settings.

The question though is how achieve this hyper-realistic training in a way that presents no health risk to trainees, trainers or the environment?

Simulator-based training offers many advantages in its ease of delivery, its accurate portrayal of chemical hazards and the enhanced learning outcomes that it provides for trainees.

Training is no longer subject to the administrative and regulatory restrictions normally associated with the transportation, certification and storage of chemical sources.

Exercises can be conducted in any environment, including public buildings and civilian areas, and be easily reset and repeated as required.

The technology requires no preventative maintenance, calibration or expensive consumables, which represents substantial cost-savings over the lifetime of the equipment.

Well-designed simulator detectors are also able to tolerate and respond to instances of student mishandling without losing valuable teaching time waiting for instruments to reset.

Argon Electronics' longstanding relationships with leading detector manufacturers has enabled it to create chemical simulators for many of the most widely used detection systems currently.

The Bruker Daltonics RAID-M series of detectors, for example, is widely used in military deployments and reconnaissance as well as for civilian CBRN operations conducted by police, firefighters, first responders and Chemical Disaster Management teams.

Simulator-based training has an integral part to play in building the capability of civilian and military teams in responding to chemical threats.

Electronic simulators accurately replicate how actual devices react, they can be used in any environment and they enable trainees to truly test core skills in highly realistic operational conditions.

If you are interested to learn more about how simulator technology is currently being used to enhance and streamline chemical training programmes then please download your free copy of the case study below.