The risks of oxygen deficiency & oxygen enrichment in confined spaces 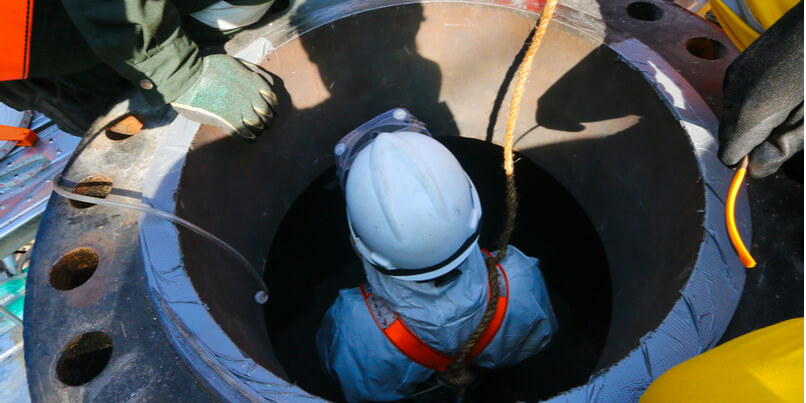 When we think about all of the hazardous materials that a first responder might potentially expect to come into contact with, it is the things that can't be sensed that can often be the hardest to control.

And when an incident is unfolding inside a confined space, even the most subtle of changes in the atmosphere have the potential to be not just harmful but life threatening.

Confined spaces are defined by the fact they are large enough to permit a worker access, but that they are not designed for continuous occupancy.

They often have a limited number of entry and exit points which can make access logistically challenging - and inside the space there may also be additional hazards such as uneven floors, sloping walls or the risk of engulfment.

As well as the visible physical obstacles, confined spaces can also play host to a range of invisible hazards - whether as the result of the presence of too little oxygen (oxygen depletion), too much oxygen (oxygen enrichment) or due to a build up of toxic gases.

What is oxygen deficiency?

Oxygen makes up approximately one-fifth (or 20.9%) of the air we breathe, with the remaining four-fifths of the atmosphere being comprised of nitrogen.

Most air monitors will be set to trigger a warning alarm when the oxygen in the air reduces to 19.5% which is the level at which the atmosphere is considered to be oxygen deficient.

When the oxygen level drops even by just a couple of percent there is an immediate reduction in the delivery of oxygen to human cells has an adverse physiological effect on an individual's ability to function.

At an oxygen level of 12.5%, respiration will likely be affected, there may be nausea or vomiting and there is also a risk of permanent heart damage.

At an oxygen level of 10% or less an individual may well experience convulsions, an inability to move, loss of consciousness or even loss of life.

When a monitor indicates that the oxygen level has changed, the crucial question that will need to be answered is, why? It is critical to understand that even a reduction of 0.1% O2 is significant and can be related to a high ppm increase of a potentially unknown gas because a sensor is absent. It's for this reason that many would say that an O2 sensor is the most important of all.

A reduction in oxygen levels in a confined space could be due to the effects of combustion; it might be caused by microbial activity (such as the process of fermentation); it could be due to the oxidisation (rusting) of the internal surface of a tank or pipe; or it might be that the oxygen has been displaced by another gas such as nitrogen or argon.

What is oxygen enrichment?

Oxygen enrichment is the generic name for the hazards associated with gases or liquids that contain oxygen concentrations in excess of 21%.

As the oxygen in the air increases there is also a significantly increased risk of a fire or explosion.

What's more, when compared with a fire in air, a fire in an oxygen enriched atmosphere is substantially more intense, with higher temperatures and a greater heat output.

Common causes of oxygen enrichment can include a leaking oxygen cylinder, a faulty pipe connection, incorrect disposal of liquid gas or the process of cutting or welding.

To ensure that the air in a confined space is safe to breathe, it will be important for responders to test the oxygen levels before they enter the location. Once inside, they will also need to continue to periodically monitor those oxygen levels as the incident unfolds.

A variety of fixed and handheld monitoring systems can be used by initial responders to alert users to any risks and to aid in their tactical decision making.

For many first response teams, this device will most likely be some form of combined portable gas monitor that comprises an oxygen sensor, a flammable sensor and a range of toxic gas sensors.

Using an air monitoring device to assess oxygen levels is essential for the protection of emergency response personnel operating in confined spaces.

It provides the reassurance that the environment in which the responders are operating is safe and breathable - and if it's not, that they can have the life-saving information they need to take appropriate action.

Hands-on training will also have a key role to play in ensuring that responders understand both the capabilities and the limitations of their monitoring devices and that they are able to interpret and act on the readings that they get.

Oxygen deficiency and oxygen enrichment in confined spaces may not be noticeable, but that does not mean it isn't dangerous. Failing to properly monitor small spaces could lead to health and fire hazards, which is why responders should have comprehensive training on testing oxygen levels before entering a location. This is where simulators are key: they facilitate Real Experience Training with devices responders would use in an actual incident. Argon's powerful app-based MultiGas simulator system delivers practical and engaging training in real time. Click here for more information.