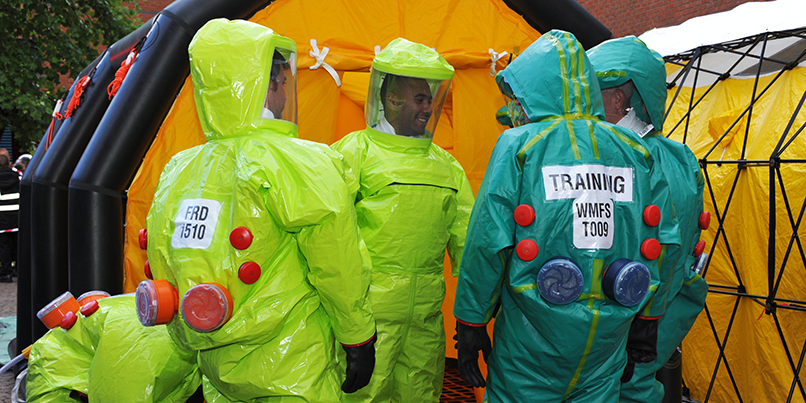 Chemical Biological Radiological Nuclear and Explosives (CBRNe) training provides individuals with the technical knowledge and practical expertise to detect and avoid chemical threats, helping them to protect themselves and carry out decontamination.

In addition, CBRNe training can act as a deterrent – an adversary may be less inclined to use chemical or radiological warfare agents if they know their opponents are well-prepared to deal with and mitigate the consequences.

Delivering CBRNe training has become more challenging. Training scenarios must be able to realistically replicate the ability to detect and monitor a near-invisible or invisible hazard as it moves through the air or contaminates equipment, infrastructure or terrain.

Live agent training (LAT) utilises real hazardous material, making it the closest experience one can have to detecting CBRNe hazards in real-life scenarios. It allows trainees to detect chemical and radiation hazards, monitor levels of contamination and carry out decontamination exercises. LAT is intensive, both in terms of staff and the associated costs and time investment. However, it provides invaluable experience and leads to ‘combat readiness’.

LAT is subject to strict rules and regulations and is overseen at the highest level. It is conducted in allocated areas (both indoors and outdoors), usually found within the perimeters of military or government establishments in specially constructed containment sites where environmental regulations are adhered to and training is carefully controlled.

While there are a host of benefits associated with this type of training, there are several very real risks. The live agents used are high-grade – usually in the 90-95 per cent purity range – meaning that highly-trained safety staff need to be available on-site, to strictly monitor trainees and to respond in case of incident. Unfortunately, this can lead to a level of unrealism that affects the learning experience of students.

Another disadvantage of LAT is that, while it represents the most realistic portrayal of the hazard environment, it also involves the greatest amount of control, meaning there is less freedom when creating training scenarios. LAT is also expensive to implement. Nevertheless, LAT is the peak of CBRNe training – having undertaken it, an individual can regard themselves as ready (as far as it is possible to be) to deal with an attack or incident.

Simulant agent training (SAT) isn't as comprehensive as LAT. SAT follows the same principles as LAT, but uses simulant agents, as opposed to live agents. These are substances that can model the properties and behaviour of real hazards without the same level of risk associated with live agents while still allowing the use of actual CBRNe detectors.

On the plus side, the relative safety (compared to LAT) of simulants means it is easier to generate more involved and realistic scenarios. And using "wet simulants" with operational detectors and monitors provides the closest resemblance to how real agents react.

However, those simulants are not harmless and must be carefully managed: many of the chemicals are non-biodegradable and can build up over time, affecting both human health and local flora and wildlife.

On top of that, simulants are difficult to dispense and control in open air, meaning that simulant performance is weather-dependant and instructors cannot guarantee replication of a particular CBRNe scenario. Trainees can usually see the instructors releasing the substances, making for an unrealistic training setting, and training time can be wasted trying to manoeuvre trainees and hazards into the right location to create the scenario.

The cost of using simulants has also risen sharply in recent times, partly driven by the health, safety and environmental requirements that go into producing them.

Simulation training provides an alternative to simulant training, and, while not a replacement for LAT, it is an excellent predecessor. New generations of intelligent, computer-based simulation tools offer a real, workable alternative to conventional training methods.

Simulators can accurately replicate how real devices react when confronted by a range of chemical agents, including the volatility of the agents, the prevailing meteorological conditions, and the tactics and techniques used to detect differing agents. But, instead of chemicals of any kind, electronic simulation agents are used.

Simulation training is realistic insofar as it realistically imitates LAT, but is safer and more cost-effective. Unlike with LAT or SAT, this form of training can be undertaken anywhere, including in public buildings and other civilian areas, which is particularly useful in the context of training for potential terrorist attacks. As live agents or simulants are not being used, there are no environmental issues or health and safety matters to take into consideration.

Trainers can portray a variety of scenarios, including large-area ones, no matter what the weather conditions are or the location where the training is taking place. As such, the instructors are able to reproduce the same scenario time after time, to determine the correct use of techniques, tactics and procedures by the trainees.

On the other hand, it can be difficult for students to suspend their disbelief when participating in simulation training and not every potential scenario can be simulated. Furthermore, unlike LAT or SAT, with simulation the hazard environment must be created artificially. This requires a greater depth of understanding and knowledge, which can be a challenge for newly-qualified instructors.

Simulation equipment is not inexpensive, because it requires a complex set of software. However, compared to real detectors, the cost of repairing simulators is less, thereby meaning their lifetime cost is lower. Additionally, the electronics simulation sources cost significantly less than the use of simulants over time, especially when the administration and remediation costs of using simulants are considered.

So which type of CBRNe training best?

Given that current governments across the world face budgetary pressures on military spending, all aspects of delivering capability have come under scrutiny - training budgets being no exception. Being able to train realistically using a mixture of LAT, SAT and simulation training is cost-effective – not just in monetary terms, but also in operational terms, as it allows the training time to be maximised to varying degrees both in the field and classroom environment and, in doing so, raises the overall standard across the CBRNe response community.