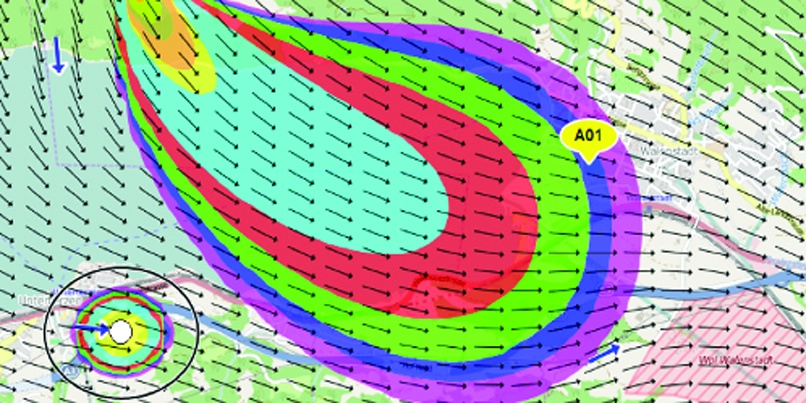 Argon Electronics is a world leader in simulation systems focused on platforms for defence from chemical, biological, radiological and nuclear (CBRN) attacks and incidents involving hazardous material (HazMat). The UK SME was founded 28 years ago and provides its products to response teams across the globe, including in Canada, Ireland, Portugal, Sweden, the UK and the US.

Now, Argon Electronics is releasing the next generation of its hugely successful product, PlumeSIM, which will be showcased for the first time at DSEI 2015. PlumeSIM is a wide area field exercise and table top training system using Argon CBRN/HazMat simulators. The portable system enables remote instructor management of its chemical and radiological simulator instruments under a fully configurable ‘virtual plume’, in real time, over user-selected mapping.

PlumeSIM is a unique tool which has already been implemented by the USAF, Canadian Armed Forces and UK MOD amongst others. The system allows instructors to manage detection instrument training of multiple personnel simultaneously, recording the actions of trainees from a central location.

The unique design of PlumeSIM allows for any type of training map to be uploaded to the software, even homemade sketches. This versatile system can first be used in the classroom with a table-top mode, where trainees use gaming controllers to move around an on-screen training area during the virtual plume scenario, and their activity can be recorded and analysed before they venture into a field training exercise.

After classroom training, trainees can practice with PlumeSIM in the field, using body-worn player units which track location, monitor activity and maintain communication with the exercise control system, so the instructor can monitor their location on the control base map via a long range radio comms link in real-time. The virtual plume scenario can be activated and then the display of the simulation instrument will indicate the appropriate response should a simulated threat be encountered.

The virtual threat is controlled using easy-to-use menus by the instructor, which enable them to quickly set and adjust the source type(s), quantity, and the location and nature of the release source, as well as the desired environmental conditions. PlumeSIM allows the instructor to define a plume or hotspot based upon variety of specific substances, CW agents, radionuclides or compounds, and to implement different release characteristics including duration, direction, persistence and deposition
PlumeSIM provides a complete training package by enabling a post-event collaborative exercise review. The recordings of both table-top and in-field activity enable trainees to maximise learning by analysing their actions and helps them to retain what they have learnt, and can also be viewed by independent moderators for response capability assessment and validation of contingency plans.

This internationally renowned system has already won a highly commended innovation award at The Tim Otter “CBRN Innovator of the Year” awards. With interest growing in countries such as Germany, India, Australia and the USA, Argon Electronics is pleased to announce that its second generation of PlumeSIM, with updated software to ensure continued easy integration with third party Live or Virtual training systems, including the growing family of Argon Electronics simulators, will soon be going live.
Steven Pike, Managing Director of Argon Electronics asserts that “the benefit of PlumeSIM to the CBRN community is increasingly visible, as it continues to improve training exercises around the world. We are excited about the new generation of the system, which should run even more smoothly with an increased number of systems and software”.

Argon Electronics will be showcasing PlumeSIM at DSEI from 15 – 18 September at ExCeL London at stand S4 – 270.