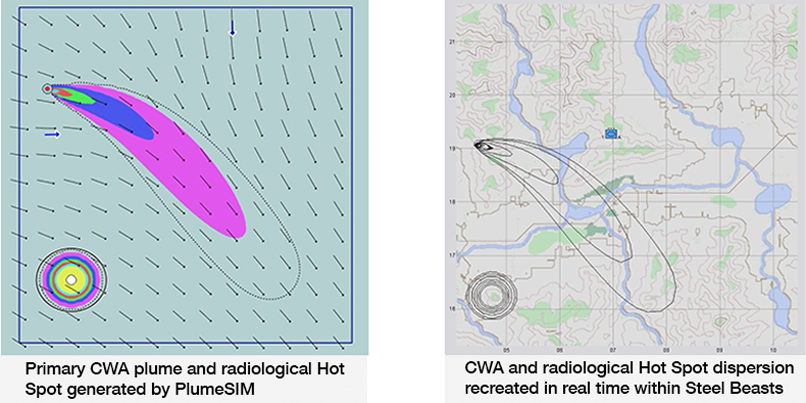 It is of increasing interest to both civilian and military organisation to incorporate support for CBRN Hazards into their training. In some instances this can be achieved by a standalone system such as Argon’s PlumeSIM. In other instances the desire it to have this capability incorporated into their own, existing systems, especially if the user is a military organisation with a need to simulate a scenario that includes a combination of hazards, including but not limited to CBRN.

Argon recognised this need and also acknowledged that it was not practical for these organisations to develop such a system; along with the broad and expanding range of physical simulators for all of the major CBRN detectors. The solution developed by Argon is the PlumeSIM API (Application Program Interface). This is a software component that enables PlumeSIM to be interfaced to third party Live and Virtual simulation systems.

This interface allows CBRN hazards to be realised and reacted to by the trainees with all of the information being present in a compatible format seamlessly within their own in service simulation system.

One such recent development has been performed in partnership with eSim Games. eSim produces Steel Beasts Pro, a vehicle-centric combined arms combat simulation and crew procedure training tool used by the military in over 10 countries. One of eSim Games’ customers’ goal is to incorporate CBRN hazards into the Steel Beasts environment, and a proof of concept was required to reduce risk for all concerned and aid further discussions.

Using the PlumeSIM API it is possible to import and display, in real time, CBRN plumes into the simulation exercise. Because the interface is bidirectional, with further development it will possible to have the plumes respond to the meteorological conditions applied within the Steel Beasts simulation.

Similarly, it would be possible to determine current and cumulative exposure of the participants to the simulated hazards based upon their position and route; the exposure could be reported to Steel Beasts, enabling a suitable damaged/disabled status to be applied to the entity and the appropriate animated response displayed within the simulation. Simulated threat dispersion within Steel Beasts is subjected to all meteorological effects implemented within PlumeSIM, including variable wind speed and wind direction.

Argon has also used the PlumeSIM API as a core component in the development of a fully compliant HLA/DIS interface, which is a standard for communication between simulation systems hosted on multiple platforms.

“This was an interesting project and once again demonstrated the flexibility of PlumeSIM and our ability to cooperate with third party vendors to provide customers with an effective training capability. This integration will enable further CBRN / HazMat training capabilities to be developed for Steel beasts in both the virtual reality and by interfacing physical argon simulator and augmented reality environment” stated Argon founder Steven Pike.

Nils Hinrichsen, Director, eSim Games commented “eSim Games is excited to see this expansion of functionality. We have always been interested in cooperation with industry partners, and this looks like a perfect example where both partners and our customers will gain a lot through cooperation. The market is eager for a quality solution at an affordable price tag which exposes combat troops in their scenarios to incidents involving chemical and radiological threats. We have just demonstrated that we are ready to deliver such a solution.”